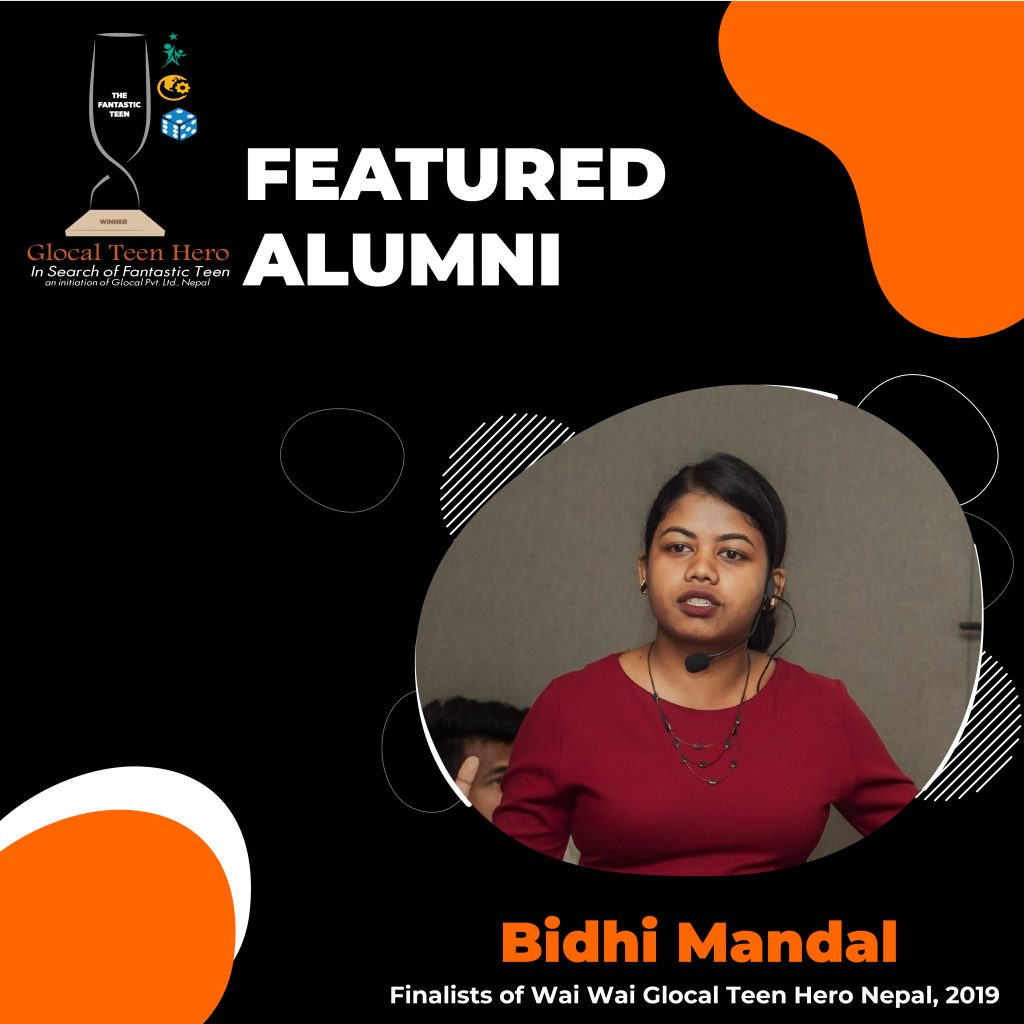 Bidhi Mandal is a young entrepreneur and social activist, who has been working in the sector of environment. She is passionate about social justice and constantly looks for ways to use Entrepreneurship to solve issues that she sees around her. She inspires youths to believe in action and act for a global change.

One Realization and A Door of Success

At a very young age, Ms. Mandal began her journey. She found her hometown in difficult circumstances. She realized that there are many people in Kathmandu and Janakpur who are suffering even in the most basic necessities following their socio-economic disparities. Later, this bitter fact incentivized her to initiate her own social venture- ‘Aawas’ and work as a social activist.

She currently serves as Vice Executive Board Member at Innovative Environmental Health in Nepal. IEHN is an organization dedicated to finding innovative and low-cost solutions to air pollution and inspiring the next generation of climate engineers. As a part of her work with the organization, she reaches out to potential partners and mentors, designs an interactive educational curriculum, and builds a robust business model.

Bidhi is the founder of the “Student Coalition for Nepal”. She started a fundraiser virtually to aid Nepal fight the second wave of COVID-19. She led a team of more than 50 volunteers and ensured the delivery of major tasks. Ms. Mandal has found ways to include Nepali students from more than 40 universities across the globe in the Coalition. Through her initiation, she has marketed the fundraiser to more than 50 universities in the US and around the world. She has raised 21,000 USD in less than 3 weeks to buy 70 oxygen cylinders and 2,000 COVID testing kits which were distributed all over Nepal.

Additionally, She is also working in the Social Impact team of a Boston-based fashion brand called Hope Sews. The brand empowers women through cross-cultural fashion. She has worked with the brand to seek social impact funding opportunities, create strategic plans and replicable processes to scale, and ways to amplify its social impacts. Apart from that; Bidhi is a council member of the US Embassy Youth Council and has worked closely with other council members to design a Civic Engagement Project.

Ms. Mandal is one of the Finalists of Wai Wai Glocal Teen Hero Nepal, 2019. She has placed herself as an example and an influence to all teenagers. She is a detailed-oriented person who enjoys trying unique things. Bidhi aspires to support those in need by addressing real issues around the globe.

Bidhi has always been enthusiastic and actively working in the field of environment and social sectors with the intention of finding herself. She has inspired millions of teenagers to believe in action and act for the betterment of society. She dreams of doing something big, something positive change that can make a huge impact in society or for the nation.