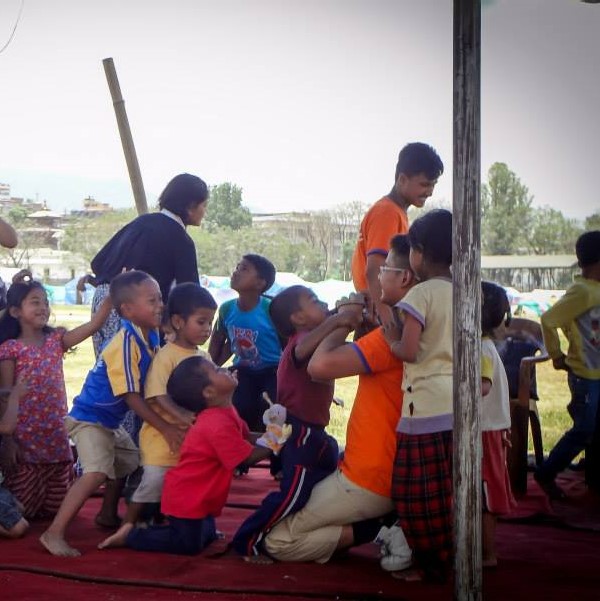 The times when my friends enjoyed going to parties and cinemas, I was enjoying helping the society. I never got money or stardom on helping people but I was receiving the end of satisfaction, happiness and respect.

The year was 2015; Earthquake of magnitude 7.8 had struck my motherland, Nepal. There was chaos and fear everywhere. And, after a month of it we were rising again, slowly but steadily.

It was during those days.

I used to leave my home at 6 in the morning for my classes. I had classes till 11. As soon as my classes were over, I used to go to Tundikhel (a public ground in heart of Kathmandu, capital of Nepal) where Corona Nepal; an NGO had run shelter for traumatized children. I had volunteered there and was in a mission to bring back the smile in the faces of children by teaching them drawing, narrating stories and spending time with them.

As the clock strike 1, I used to go to Nepal Scouts headquarter to my Scout masters home which was our base camp during those days. I was a part of Nepal Scouts earthquake rescue team. We used to clear up the roads for people to enter their home and helped people take out their belonging from rubble and transport it to a safer place.

We were never asked to do such works out of compulsion or for money. We did it because it was our duty during times of need. The applause you receive from people after you help them enter their house after a month or save their favorite things from a destructed house are filled up with such respect and dignity that it motivates and inspires you to do more of such things. That glass of water people offer you after you drain your energy trying to clear up the path for others to walk is filled up with gratitude and respect that it push you to never back down from helping others. These moments make you attached to the society you live in.

Even after two years now whenever I feel low, I remember those days that made me the person I am today. Those days of service taught me what it means to be living a life rather than just breathing.

In 2016, I along with my two friends formed a group in Facebook and named it Teenage Society of Nepal, also known as TSN. We gathered a group of teens who wanted to do something for the society. We had a virtual meeting. Thus, TSN was born.  We always believed in the fact that if we start making teens of today aware about their responsibility towards the society, the will grow up as motivated youths who want to serve the society and these motivated youths one day will grow up to be concerned parents that will build up better generation of humanity to live in this earth, who care about their society and environment.

Virtual meetings and creating awareness in Social Medias was not enough. Thus, TSN members formed a committee and I was elected the president of the society.  None of our teens in society were earning so we had to hold meeting in public parks during Saturdays, and discussed what project we can carry on from our side to help the society to make it a better place to live in.

Our very first project was making our naïve friends know the truth of the society. We went to a school  in a remote place, where we hiked for 3 hours to reach. There, our friends realized how hard it is to get education. Everyone was so motivated that after couple of months we were able to make a library in that school by collecting books from friend circle and self-donation.

Some weeks later, TSN was informed about a 10 year old girl suffering from blood cancer and had poor economic condition. Despite the fact that everyone in the TSN were high school students and were not earning, we wanted to help that girl. We saved our money from lunch and raised capital to buy pens.

We bought pens for 10 rupees and sold them to our high school friends for Rs. 25. They happily bought the pen when the cause was explained to them. A total of 25,000 rupees was collected and was donated to the girl. Even though none of us were earning members of the society, but the team was full of determination.

Our learning from the project was, “If we are determined to help someone, money is not the major problem. Lacking of wiliness to help is”

We look forward to build a global network of people with willingness to help.

Thus, this is my social life story. I know my works are not too big, but I feel satisfied of what I do. I feel contended on helping people. Today, I feel proud walking through the same roads which we cleared during the earthquake, but no one remembers me because I was wearing a mask back then.  These works make me feel more attached to my society. It makes me realize my goal in life to make my society a better place and if we have more people determined to make their society better we will end up having a better world to live in.

Following are the links of some of our works

The Business Bootcamp really opened my eyes to new ways of teaching, learning, training and sharing. The experience was amazing. It didn’t give us answers to a problem but guided us to find it ourselves, or collaborate with each other to attempt different things. When you and your team brainstorm in finding every solution to a problem without anyone giving you direct answer, it is truly a rewarding one anyone can experience. It certainly develops your confidence and your ability to think continues to grow more and more with every tasks.

The first day of boot camp, we started our trip from CGIM. Everyone there were strangers except for two or three. But that was only for few minutes.  As soon as we got inside the bus, we started talking. I could see excitement on everyone’s face because we weren’t told anything but to ‘expect the unexpected’.

We reached Nagarkot and at around 2:30 pm we gathered and the event started. In the evening, we met Mr. Arun Chaudhary, Founder, CG Holdings. We interacted with him, shared our ideas and had our dinner together. We conversed on various ideas and after dinner we had discussion on the topic ‘politics’. I got to sharpen my knowledge about politics. It was indeed a privilege meeting Mr. Arun Chaudhary.

At night, I and my room partner started researching about our ideas because we had to present our business pitch tomorrow morning. It was already 12 am and we were awake till 5 in the morning.

I woke up at 8 o’clock. I didn’t have much time so I started practicing my pitch in front of the mirror over and over again. When the program started I was a bit nervous because I felt exhausted since I didn’t sleep properly. Then the pitching started. I pitched my idea as well. Out of 14 ideas only 4 were selected. Out of the surprise, I was one of the four.

My group had 4 members. Our idea was to make affordable sanitary pads. We started brainstorming on making a business model. We had mentors and guides. Mr. Saurav Jyoti, Director, Jyoti group, was among them. He shared his experience and we asked our queries to him. Mr. Prayash Rajopadhya from Job Dynamics was also there for motivation and workshop session. I was able to gain knowledge about business, how a case study is done, how to develop business plans and much more.

At the end of the day after dinner, we started preparing the business plan and presentation on our business idea for the next day.  It was almost 3 am in the morning but I hadn’t completed the work so sleep was out of the question.

Next day we had mentors coming, Mr. Hempal Shrestha, Mr. Anjan Kumar Shrestha along with other mentors read our business plan. They revised, edited and refined our idea so precisely that we had to come up with another business plan and presentation to make it viable. That day was exhausting because we were continuously working and not resting at all. After dinner, we planned to play games to relax our mind. That was the moment when I actually felt a relief after a long day.  While we were laughing and enjoying with everyone, I had completely forgotten about the two deadlines at 3:30 am and 5:30 am, irony – it was already 11 pm.

Me and my group started brainstorming, making presentations, designing business plans and finally with a little luck we submitted exactly at 3:32 am. We still had to submit another business plan and presentation (phase 2) at 5:30. We already were feeling sleepy but still we worked on it. Though we had so little time, we were able to submit them on time.

That night while researching, discussing, planning and developing business model I learnt that no matter what when you’re working with your team on a problem, you get different views, opinions, thoughts that help you know more and understand the problem more. That teamwork experience is truly a rewarding one.

Overall experience was amazing at the boot camp. I’m grateful that I applied – I look back at what the boot camp has taught me and I am grateful for it. It taught me the fundamentals – not the shortcuts, or the direct answers but it taught me how to think and how to solve prevailing issues. I wonder where I would be if it wasn’t for boot camp – would I truly understand what business plans are? The fundamentals of business planning? about case study ? I guess NOT.